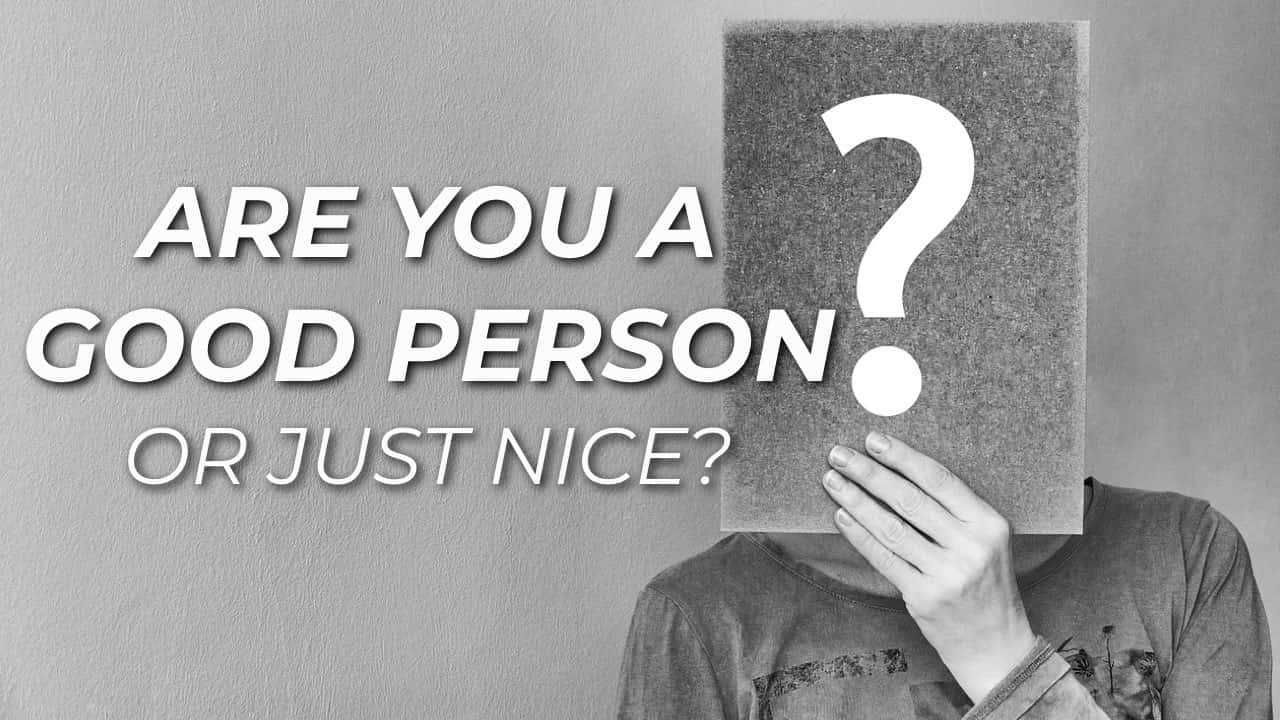 Are You A Good Person Or Just Nice?

“I’m such a good person, but people keep screwing me over.”
“I’m so good to everyone, but people always take advantage of me.”
“I just want to get along with people, but it keeps backfiring.”
“I’m doing my best, but people don’t respect me.”

There are 100s of variations of the above, but I’m sure you get the idea.

More importantly, does this sound/feel familiar?

If so, I have bad news and good news.

The bad news is that most likely, you’re “nice”, not good.
There is a big difference between the two.

Nice people do nice things. It sounds noble, but it’s not.
They do it because they don’t like tension.
They do it because they want to be liked, appreciated, respected, approved of, and agreed with. Nice people care way too much about feelings and opinions of others. Not in an empathic way, but because if they disagree with, or god forbid challenge, someone, it might impact the rapport and connection with the other person.

Nothing wrong with being nice to others.

However, nice people are willing to bend over backwards, compromise their own values, not be true to themselves, just to be nice and liked. They keep doing it over and over again, sometimes for decades. But there is a big price to pay for this. One day they’ll realise they don’t even know who they are anymore because they became who others wanted them to be or what others agreed with.

And the sad part is, it doesn’t work anyway.
Nobody really likes “nice people.” Most of us know a few, and there is something about them we cannot trust. They seem to lack character, and a bit of spine, right?

Nice people are like artificial sweetener. It’s sweet, but it has a weird aftertaste and we will always prefer the real thing.

But nice people are not necessarily bad people. On the contrary, they are often too nice. They don’t show or have their boundaries clearly set. This is why others often take advantage of them and exploit them.

If you don’t set your boundaries, others will set them for you and it will be in a way that works for them, not for you.

The good news is that one can change.

How do I know? I used to be a nice guy. Ugh!
But I changed. One of the best decisions in my life!

What’s the difference between being nice and being good?

Good people do the right thing, not what feels nice or is convenient.

Good people know what their truth is and they speak it.

Good people have their values clearly defined, and they align their actions with them.

Good people are not afraid to speak up and say it how it is.

Good people are willing to rock the boat and make people feel uncomfortable (or even pissed off) if that’s what it takes to do the right thing.

Good people prefer to be respected than liked (which makes them likeable as well because you always know where you stand with them).

Good people are strong because their sense of self-worth, self-respect and confidence is coming from within and not from the validation of the people around.

Good people are hard to offend because they know who they are and what others think of them doesn’t define them.

Good people don’t feel like they have to laugh at someone’s stupid jokes or offensive comments and can look in the mirror afterwards and smile.

Good people respect everyone but worship no one.

Good people follow their own path, not other people (blindly).

If you’re a nice person, stop it!

Yes being good will be uncomfortable at times and you will burn some bridges, but it requires NO ass kissing, spine bending, inner shame, and neediness for others approval.

Work on being GOOD!

If you need a support of a life coach, you’re always welcome to contact me and let’s find out if we’d be the right match.