The Uncomfortable truth about the Fear Of Success

A big part of my work as a coach is helping my clients overcome all sorts of obstacles, fears, and limiting beliefs that are holding them back from achieving their goals.

There is one kind of fear that always amazes me.

The fear of success.

For a long time, I’ve been meaning to address this because it’s one of the biggest delusions of all. I hope that you’ve been held back by the fear of success because after reading this article, you’ll have a very different perspective on it (and other things).

First of all, let’s clarify what I mean by success in this context: It’s accomplishing something remarkable, something out of the ordinary that you have a strong desire for.

And it’s most likely something different for everyone.

Here are the most common forms of the fear of success:

A Fear of success no.1: I’m afraid I’ll become too successful.

Firstly, it’s just as naive as thinking: I’m afraid to work out because I may end up looking like Arnold Schwarzenegger.

Arnold’s famous comeback to someone saying “I never want to look like you” was: Don’t worry, you never will!” 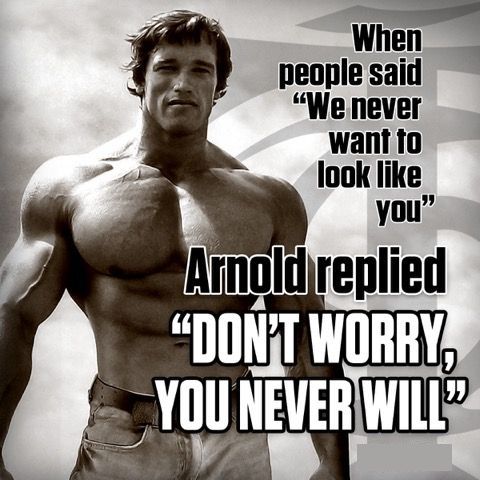 Achieving something extraordinary (think about it EXTRA-ORDINARY) is usually pretty hard and takes a long time. Being too famous is not even what the majority of already famous people worry about. It’s your foot on the “success accelerator” so you can always ease your hard work a bit if you feel you’re getting too successful.

Secondly, what exactly are you worried about?

Too much fame or attention?
Well, you don’t have to scream it out of the window that you achieved something if you don’t want attention. There are many successful people who are staying under the attention radar. Being successful or accomplished doesn’t mean you have to become Instagram famous.

Having too much money?
Is this really what you’re worried about? I think it’s a nice problem to have.

A Fear of success no.2: I’ll become successful too quickly?

No, you won’t.
If you do a bit of research, you’ll find out that even every “overnight success” (usually in show business) was years in the making and people were working their assess off to get to the point where someone relevant noticed and they got a chance.

Real success takes A LOT of work.
I encourage you to read a few biographies of successful or accomplished people to understand what it takes.
Becoming too successful too quickly is probably not even a real thing.

Still, when your success starts rising (slowly) you will have plenty of time to adapt to it. Trust me.

Just get started (and keep going for months or years) and you’ll understand.

A Fear of success no.3: I’m afraid because my life may change.

Yes, it probably will. Isn’t that the whole point?
Is your life so great right now that you would not trade it for your version of success? Something doesn’t add up here.

And if you’re afraid it would change too much or too quickly, as mentioned earlier, you always have your foot on the accelerator, plus you will have plenty of time to get used to the awesomeness. It’s usually easier than you’d think. Getting used to things is one of the great human virtues.

A Fear of success no.4: I’m afraid that it would change me.

Well, now we’re on to something.
I always say: Money, fame, and alcohol shows who you really are when you feel like you no longer need to be nice.

I truly believe that success (and the other things) only exaggerate who we really are.

And this can be scary if you’re not sure who you really are or if you know that you have a couple of demons.

Firstly, pursuing your version of success and overcoming all the obstacles on the way is one of the greatest ways of self-discovery. It’s the battlefield and tranches that shows you what you’re made of.

And mark my words, on this journey, you’ll find quite a few things about yourself that will be less than impressive. That’s totally ok. The most exciting thing about life is that YOU are never your final version. So as these things emerge, it allows you to work on them and improve.

As the saying goes: it’s not about what you’ve accomplished but who you’ve become as a result.

Secondly, if you’re afraid that success would release some of your demons out of the closet, don’t you think it’s time to address them anyway? Don’t let these things hold you back. Whether it’s your past, insecurities, fears, anxieties, it all can be worked on and overcome.
Your life will get better just by doing that, even if you won’t run after your success.

These demons are psychological tumours, and they need to be removed.

So what the fear of success is really about?

After working with many many clients on this, under the layers of coverups and BS, it always boils down to this:

I’m afraid that I’ll make all the sacrifices and put all the work in and it won’t be worth it.

Put simply: I’m afraid that I get what I want, and I still won’t be happy.

And that’s a scary thought.

So why do people have “fear of success”?

Because it’s convenient to have something to blame, just not ourselves.

It’s convenient to have an excuse that we’re not happy or fulfilled because we don’t have what we want.

It’s convenient to believe that happiness and fulfilment come from the outside because then we don’t have to question whether there is something wrong with the way we think about who we are, what we have, and our life in general.

It’s convenient to blame something on the outside than within ourselves.

The real success is becoming the person you respect, love, and admire. Someone you’re proud of.

All the other versions of success are a great addition to this but can never replace it.

If you need the support of a life coach to help you with making a great first impression or with any other areas of your personal development, you’re always welcome to contact me and let’s find out if we’d be the right match.

THE FIRST STEP IS SIMPLE.
IT’S A DISCOVERY SESSION WITH ME WHERE WE’LL DISCUSS YOUR GOALS, CHALLENGES, AND HOW WE COULD MAKE A GREAT IMPROVEMENT TO YOUR LIFE.

IF WE’RE A GREAT MATCH, WE’LL TAKE IT FROM THERE.