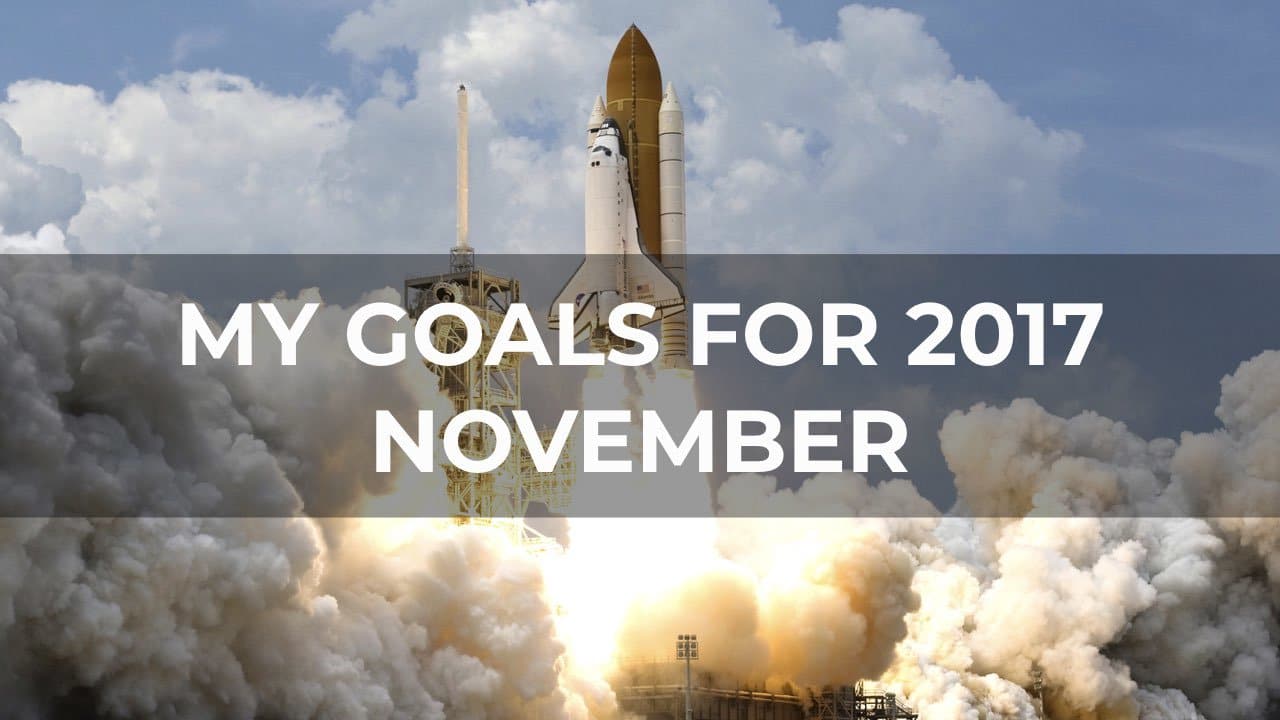 I hope November has been a great month for you.

It certainly has for me. It’s been my best month yet in many ways.

In December, set aside a couple of hours away from everyone and everything, and reflect upon 2017.

What went well for you? What have you accomplished? What are you proud of? What did you do right?

What wasn’t so great? Where have you played small? What have you avoided dealing with and shied away from?

What will you do differently in 2018?

What do you want and love to accomplish?

How do you want to grow, change, and improve?

Write it down. Plan how to do it. Who can help you?

Failing to plan is planning to fail!

Consistently great results don’t happen as a result of chance.

Be realistic but also be brave.

I plan all the time. My life started turning around when I started planning for it (and following the plan).

Below are my goals for 2017 along with the current progress status. Some of them I’ve already completed, some are in progress, and a few would be a heroic accomplishment to finish, but I’ll try.

✅ I will easily make two new business or personal connections each month.
(I’m pretty consistent with this goal. I love making new connections.)
ℹ️ If you want to expand your social or professional circle, make it a habit to regularly connect with people in that field or common interests. It may be online or offline. An important part is that you don’t do it just to get/take but also to bring/give. You need to be a person of value. Whether it’s skills, knowledge, support, friendship, connections, be someone who adds value to others.

? I will easily complete GetResponse 10,000 mailing list program by December 31st, 2017
(I haven’t made any progress on this. Still on lesson 22. It’s not a high priority at the moment.)

✅ I will easily release at least fortnightly newsletter to my mailing list
(I’m on track with this goal.)

ℹ️ An ambitious goal but I’m slowly crawling there. I could easily get there by increasing my ads budget but that’s not the point. I’ll get there the right way.

? I will easily post 30 short videos on my Instagram by December the 31st, 2017
ℹ️ Planned for November – December. Not a priority but I may just get on with it.

✴️ I will easily run a seminar or workshop abroad by December 31st, 2017
ℹ️ Preparing for a corporate workshop in the Philippines in December 2017.

✴️ I will easily enrol at least 40 new clients by December 31st, 2017
ℹ️ Currently 36 new clients. The nice problem with this goal is that I have clients often renew which I’m not counting as a new client. It may still happen though!
September: 29
October: 32
November: 36

⚠️ I will easily create and run a signature program/workshop #OKisNOTenough by December 31st, 2017
ℹ️ This is not going to happen this year as I simply cannot accommodate it in my schedule. But it will be one of my primary goals for 2018!

✴️ I will easily complete at least 150 meditation sessions by December 31st, 2017
September: 68
October: 90
November: 112
ℹ️ I’m determined to make this goal. Thats more than 1 meditation a day in December. OK then!

✅I will easily read 12 books by December 31st, 2017
ℹ️ Below is a list of books I’ve already completed reading and the ones with the ✅ are recently finished.

1) How to Have a Good Day: Think Bigger, Feel Better and Transform Your Working Life
2) The Prosperous Coach: Increase Income and Impact for You and Your Clients
3) When Breath Becomes Air
4) The Subtle Art of Not Giving a F*ck: A Counterintuitive Approach to Living a Good Life
5) Alien: Invasion
6) Astrophysics for people in a hurry
7) Welcome to the universe: An astrophysical tour
8) Challenging Coaching: Going Beyond Traditional Coaching to Face the FACTS
9) The Coaching Habit: Say Less, Ask More & Change the Way You Lead Forever
10) Man’s Search For Meaning
11) Challenging Coaching
12) Shoe Dog
13) Originals: How Non-conformists Change the World
14) ✅ The Things You Can See Only When You Slow Down
15) NOW READING: Blue Ocean Strategy
16) NOW READING: The Art of Coaching
17) NOW READING: The Happiness Advantage
18) NOW READING: Sleep: The Myth of 8 Hours, the Power of Naps and the New Plan to Recharge Your Body and Mind

✴️ I will easily practice visualisation every day