On April the 28th 2019, I’ve run my first marathon (suggesting it most likely wasn’t my last one) and it was a pretty incredible experience, and I want to share it with you.

While professional athletes like Eliud Kipchoge make running a marathon quite easy, crossing the finish line with a smile, a marathon is 42.2km or 26.2 miles, and ordinary mortals take 3-5 hours to finish it. That’s a long run!

So it’s obvious that one cannot just show up hoping they can run the whole distance. If you want to finish the marathon and finish it without an injury, you need to train for it.

I trained for four months, and my training plan consisted of 75 runs, running 5 times a week, typically two short runs (30 minutes) two medium tempo and interval runs (60-90 minutes) and one long run (2-3.5 hours).
I do love running, but the training itself was quite challenging because of the time it took, but it prepared me really well for the race.

In my four-month training, I covered 950 kilometres.
This, in fact, was initially my running goal for the whole year (1000km).

So let’s talk about the race.

Marathon, although a running race, is not just about running.

I’d say, even if you are fit enough and can run the distance, it’s only half of the battle. The second half is the mental warfare that sets off in your head when the doubt or pain kicks in.

I must say I didn’t have any nerves in the days leading up to the race. I knew I did all I was supposed to do, I had all my gear prepared, and knew all the details and instructions.

The real excitement kicked in when I got to Greenwich Park where the marathon was starting. Tens of thousands of runners (42,000) gathering, getting ready lining up at the start (and for the toilets! If you believe in reincarnation, make sure you act so that you won’t come back as a toilet at a marathon race as that must be the ultimate ordeal!). 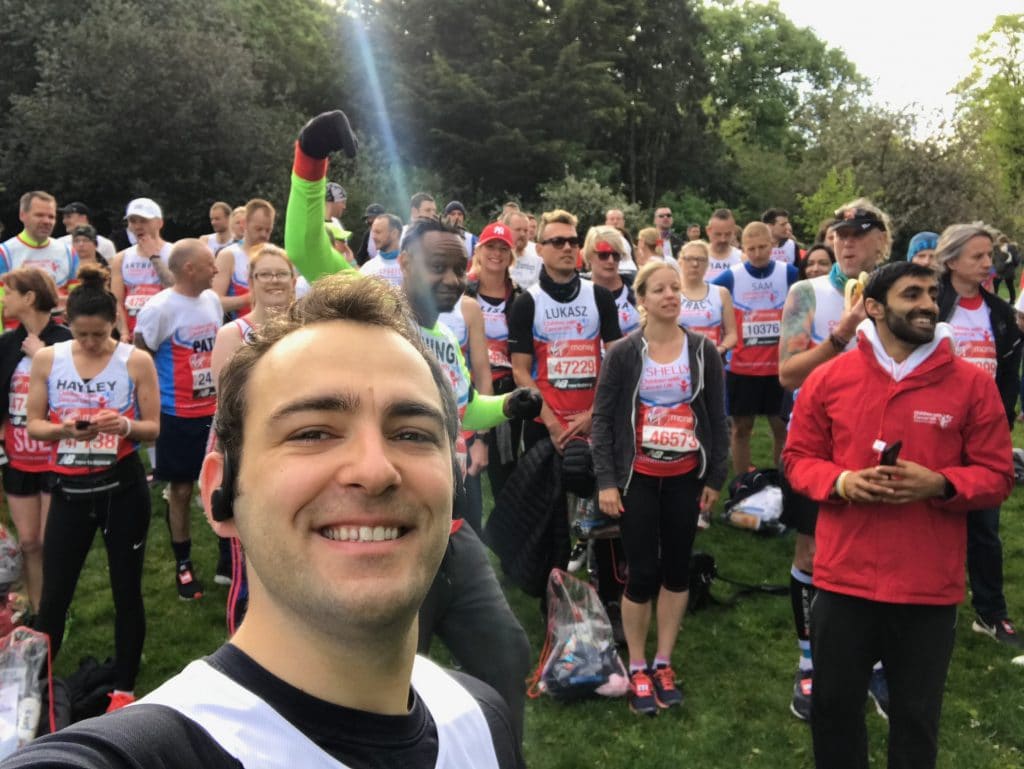 I knew there was going to be a bit of a wait on the starting line so I wore a bin bag (an old trick to keep myself warm) which I ripped off as soon as the race started.

Then at 10:10 am the announcer started the race.

First of all, the crowd was incredible.
Throughout the whole race, there were people all along, cheering, shouting runners names, giving away sweets, orange slices, displaying banners with names, charities, or pictures of Super Mario PowerUp mushroom encouraging you to tap it for an extra energy boost (there were also some with faces of politicians which you could punch or slap for the same benefit).

Apart from the fantastic crowd support, the first 10 km were fairly uneventful. I focused on starting slow and build up speed throughout this stage. I knew if I started too fast my legs, especially my shins would be killing me for the rest of the race. I resisted my competitive nature.
Unfortunately, my action camera started crashing and freezing and the only way to restart it was to take the battery out and put it back in. Fun stuff while you’re running.

Halfway was just behind Tower Bridge. The closer we got to the bridge the crazier and louder the crowd was. I almost couldn’t hear the music I was listening (to maintain my running cadence). I felt good, I had a lot of energy, and I thought to myself; This is easy!!! 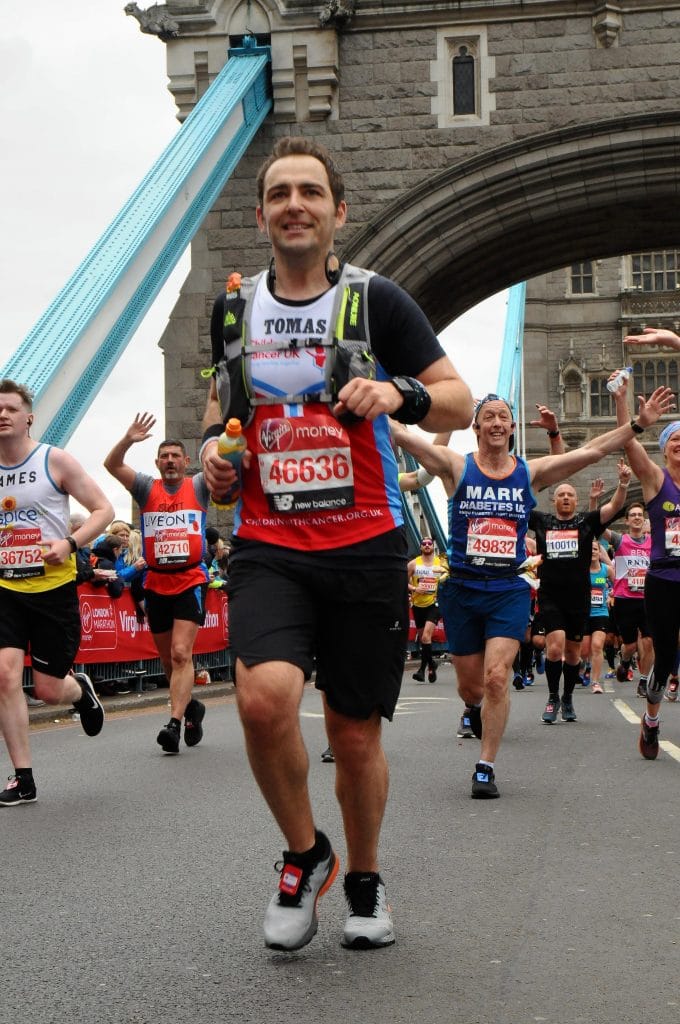 I was running the race with my running backpack as I needed some pockets for my phone charger (I was worried my phone battery would run out as I was using it to GPS track my race), running gels, extra painkillers, Action Camera and spare batteries for that, too.
I planned a 10-second pitstop to drop everything off at around that point as the race route went near my building. My girlfriend was waiting by the barricades at an agreed spot, and as soon as I got there, I took off my backpack, kept a couple of gels, put my phone in the armband and within a few seconds took off again. I forgot to keep the painkillers and cooling gels.
Big mistake, but at that point, your mind is not as sharp as usual.

I started to feel “the wall” building up as well as the burn in my ankles and knee. Now I truly regretted forgetting the extra painkillers in my bag.
When you run for a few hours, you burn through your glycogen reserves, and your body starts acting up just as your car would when you’re running out of fuel. This is where the mental warfare begins because unlike your car your body can actually run on a seemingly empty tank. 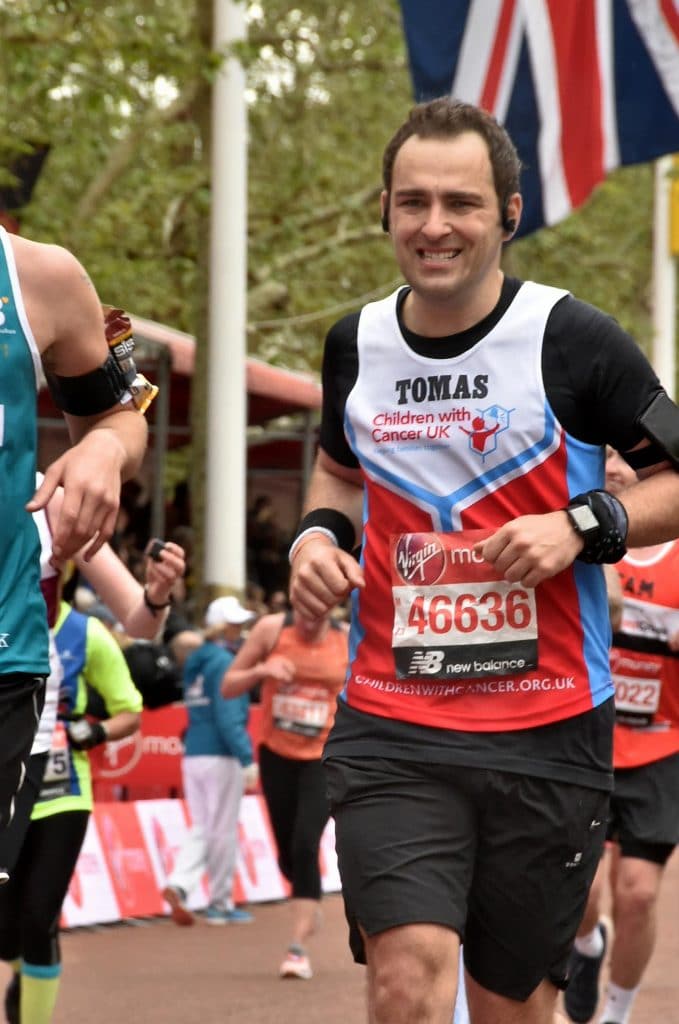 I was ready for it, but when your mind is cloudy, it takes all you’ve got not to give in. My mind was coming up with all kinds of creative ways to justify stop running.
“Hey, your muscles are cramping! When you stop or walk for a bit, you’ll feel better.”
“When you walk for a bit you’ll be able to run faster then.”
“If you don’t stop you’ll bomb any minute.”
“You should stop by the paramedics and get some salt tablets.”
“Your ankles and knees are killing you man, what are you doing?”
“Just walk, man, just for a bit.”

And dozens of variations of the above.

How did I keep myself running?

The answer was “Yes” regardless of how my body felt.
I still could run. So I kept repeating to myself:
“Stop being a pussy and run! Come on! Come on!”
That kept me going.

I didn’t know exactly because my GPS tracker was already showing 42km.
But I was pretty sure that if I walked, I’d miss it.
I didn’t want to walk, I wanted to run the whole thing.
So I reached somewhere for some extra energy and sped up a bit.

At that point, the extremes among runners started to grow.
On one hand, I could see other runners squeezing the last energy resources and speeding up. On the other hand, there were more and more runners walking, standing, sitting or stretching. I even saw a few lying on the ground attended by teams of paramedics.

If I didn’t know what the London Marathon can be like I’d think I was hallucinating because there was Bender from Futurama running next to me, and a rhino earlier.

I saw the 800m mark. So close!! The finish line was so near.
I started running even faster. My quads were cramping, my ankles and left knee were on fire. My face was twisting in a painful grimace.
I didn’t care, I was 200 m from the finish line.

Towards my left, I saw two guys carrying another runner. He could not stand on his legs.

Finally, I crossed the finish line.

I had nothing left in me at that moment. 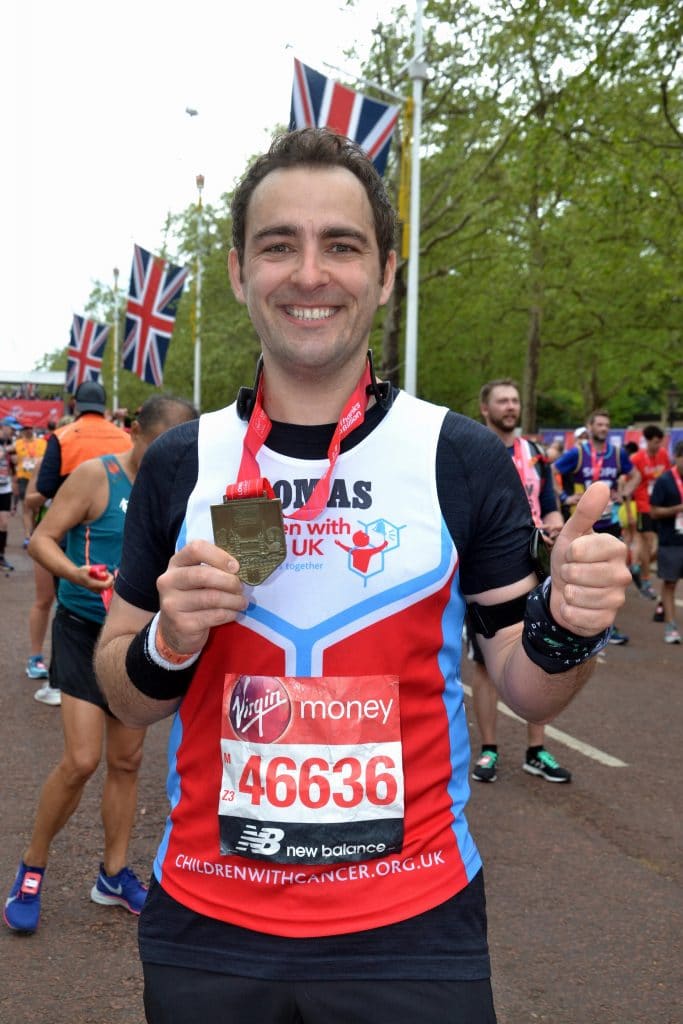 My legs were on fire but I looked around, and I remember looking at other runners around the finish line and thinking I still stand pretty well.

At that moment I had a lump in my throat.
The release of all the adrenaline, emotions, tension, relief…. it was an incredible moment.

You know what? I didn’t care and still don’t care because I know a left it all out there. I did my best. I won over my own mind, my own doubts, over all the pain end exhaustion.

Then I received my medal, and it felt amazing.
Above all the expected feelings like pride, achievement, satisfaction, the main feeling that took over me was contentment and peace for doing the best I could and not letting myself down.

In afterthoughts, the medal is 40% for the race and 60% for the training.

PS: Thank you Children with Cancer UK for allowing me to run and fundraise money for them. They took terrific care of me and other runners.

PSS: Below all the smiles and “It was amazing”, this is what one really feels like after running a marathon. 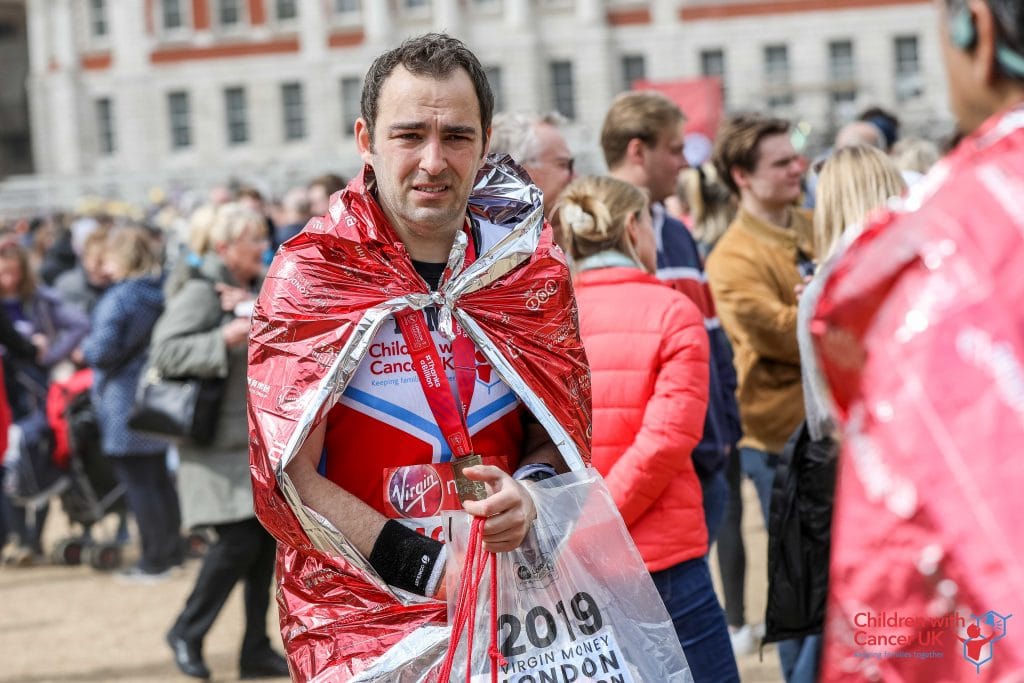 If you need the support of a life coach to help you with making a great first impression or with any other areas of your personal development, you’re always welcome to contact me and let’s find out if we’d be the right match.